MD West Aglow is part of the Mid-Atlantic Region of Aglow International serving western MD and extending into portions of WV and PA.  Our MD Lighthouses are currently located in Boonsboro, Frederick, Hagerstown, Middletown, and Cumberland.

Our WV Lighthouses are located in Keyser and Charles Town, and our PA Lighthouse is in Waynesboro. We are actively involved in ministry that impacts the lives of men and women in this region. Together we are dedicated to seeing Jesus lifted up in our communities and presenting His hope and life to all those interested. 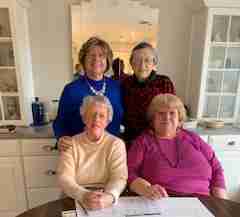 Small group studies, care (support) groups, retreats, and annual conferences make up the Aglow year. Two foundational pillars of the organization, prayer, and outreach with the Good News, are supported with tangible responses to community need: gifts of clothing, food, housecleaning, and babysitting. Aglow women and men reach out to their communities in many directions: prisons, senior homes, inner city neighborhoods, and mental institutions; to single moms, as well as to the next door neighbor who may need a cup of tea and a good chat with a friend.

Aglow is, by nature, dynamic around the world! Meetings vary from nation to nation in order to meet the cultural and geographic needs of women and men in locations as diverse as the people themselves! Large groups gather to worship, and hear a speaker; smaller groups (from 3-10) meet, forming prayer groups, Bible studies, or care groups. Believers with a heart for outreach form groups to help meet community needs to visit nursing homes, orphanages, tutoring at schools and participating in food programs.

Up close and personal: that’s a good way to describe Aglow Bible studies. Small groups meet together regularly to study the Bible and share issues and questions that touch hearts. Bible studies are an especially good place for new Christians to come together with other Christian women to explore God’s Word and put the timeless truths found there into action in their own personal lives.

Through fellowship, prayer, and loving support, women and men come to know who God created them to be, and by walking in the principles of that new identity, they are able to establish transparent, godly friendships that will last a lifetime. As one participant said, “Being part of an Aglow Bible study gave me the confidence to step into who God wants me to be.”

As Aglow has grown, more groups have formed around special areas of ministry such as prison ministry, ministry within local churches, outreach within neighborhoods, and teen or youth ministry.

Around the world, Aglow conferences are places of impartation from the Lord, individually and corporately. It is during these times that Aglow women and men catch vision from leaders, and become equipped to return as servant leaders in their communities.

Through the years, national conferences have been held in more than 50 nations. Recently, in response to a growing desire among members to widen their spectrum beyond national borders, Aglow has encompassed a greater sphere. Aglow’s recent All Asia, and All Africa conferences have drawn participants from several nations, to further strengthen the bonds among people of faith.

For more than two decades, worldwide conferences (held in the U.S. on odd-numbered years), bring thousands of Aglow women and men together. One highlight of the gathering is the opening session’s flag parade where leaders from more than 100 nations joyously celebrate their faith, and life in the Spirit.

Deprecated: Directive 'allow_url_include' is deprecated in Unknown on line 0